What is Nix and how to use it? 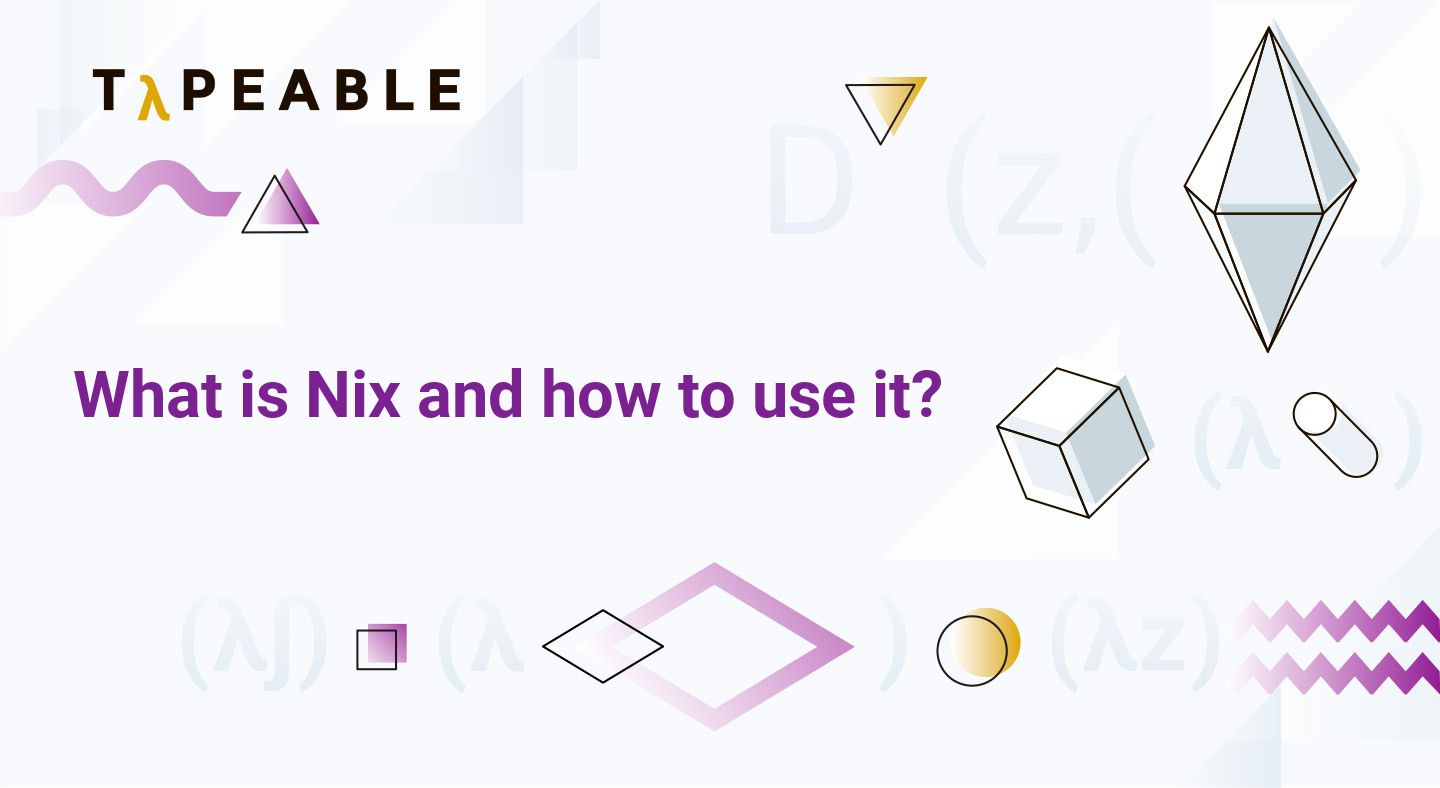 Here at Typeable, we wanted to publish a small series of posts about the way Nix helps us (and slightly hinders) in software development. We would like to start with an introduction to Nix which we might refer to further on.

You can find the files for this post here.

Where to get it?

Apart from NixOS, where you don’t need to do anything, Nix can be installed on any (or almost any) Linux distribution. To this end, you just have to run the following command:

When you speak about Nix, you often imply two different entities: Nix as a language and nixpkgs as the package repository also constituting the basis of NixOS. Let’s start with the first one.

Nix is a lazy functional language with dynamic typing. The syntax looks much like the languages of the ML family (SML, OCaml, Haskell), which is why those who know them are not likely to face any issues.

You can start getting familiar with the language simply by running the interpreter.

There is no special syntax used to declare the functions in Nix. The functions are defined by assigning, similarly to other values.

All functions are curried, in the same way as in the languages which have influenced Nix.

In addition to the primitive types such as numbers and lines, Nix supports the lists and dictionaries (attribute sets in the Nix terminology).

The values within the local scope can be set using the expression let...in. For example, here is a simple function implementing a factorial, as it is usually done in other posts on functional programming.

Directive inherit introduces or “inherits” the term from the current scope and gives it the same name. The example above is equivalent to the record let fac = ... in { fac = fac; }.

When files or modules are uploaded to REPL, Nix expects that the module computation will result in a set whose elements will be imported in the current scope.

To download the code from other files, Nix uses the function import accepting the path to the code file and returning the result of this code.

Though assigning the module to an individual variable is done rather often, it looks somewhat awkward here, doesn’t it? Nix includes the with directive adding all names from the set passed as the parameter to the current scope.

Building programs and individual components is the main function of the Nix language.

When working with packages, the main tool you should know about is Derivation. In itself, Derivation is a special file containing the recipe for a machine-readable build. The derivation compiling a program in C that displays “Hello World!” looks approximately as follows:

As you can see, this expression includes the path to the resulting build and the paths to the source files, build script, and metadata: the project name and platform. It should also be noted that the paths to the source code start with /nix/store. During the build, Nix copies everything it needs to this directory. After that, the build is carried out in an isolated environment (sandbox). Thus, the reproducibility of all package builds is achieved.

Let’s analyze this example. The entire file is the definition of the function accepting one parameter – the dictionary containing the pkgs field. If it was not passed during the function call, the default value will be used: import <nixpkgs> {}.

derivation is the function also accepting the dictionary with the build parameters: The name is the package name, the builder is the build script, the src is the source code, the system is the system or list of systems the package can be built for.

The writeShellScript is one of the nixpkgs functions accepting the script name and code and returning the executable file path. For multiline text, Nix offers an alternative syntax with two pairs of single quotes.

Using the nix build command you can run this build recipe and obtain a working binary file.

When you run nix build, the symbolic link result referring to the package created in the /nix/store will be generated in the current directory.

derivation is the fairly low-level function Nix uses as the basis for far more powerful primitives. As an example, we can consider the build of the well-known cowsay utility.

The original script can be found here.

stdenv is a special derivation containing the build rules for the current system: the required compiler, flags, and other parameters. Its main content is the huge Bash script named setup working as the builder script in our simple example shown above.

mkDerivation is the function creating the derivation with this script and simultaneously filling out other fields.

Those readers who used to write package build scripts in Arch Linux or Gentoo might see a pretty familiar structure here. Just as in other distributions, the build is broken down into phases, dependencies enumeration is available (buildInputs), and so on.

In this part, I’ve tried to describe the most basic aspects of using Nix as the build description language. In the next posts, I’m going to show you the ways we use Nix at Typeable and the ways you’d better not use it. Stay tuned!

Besides, a far more detailed introduction to Nix is published on the website of the project itself under the name of Nix pills.