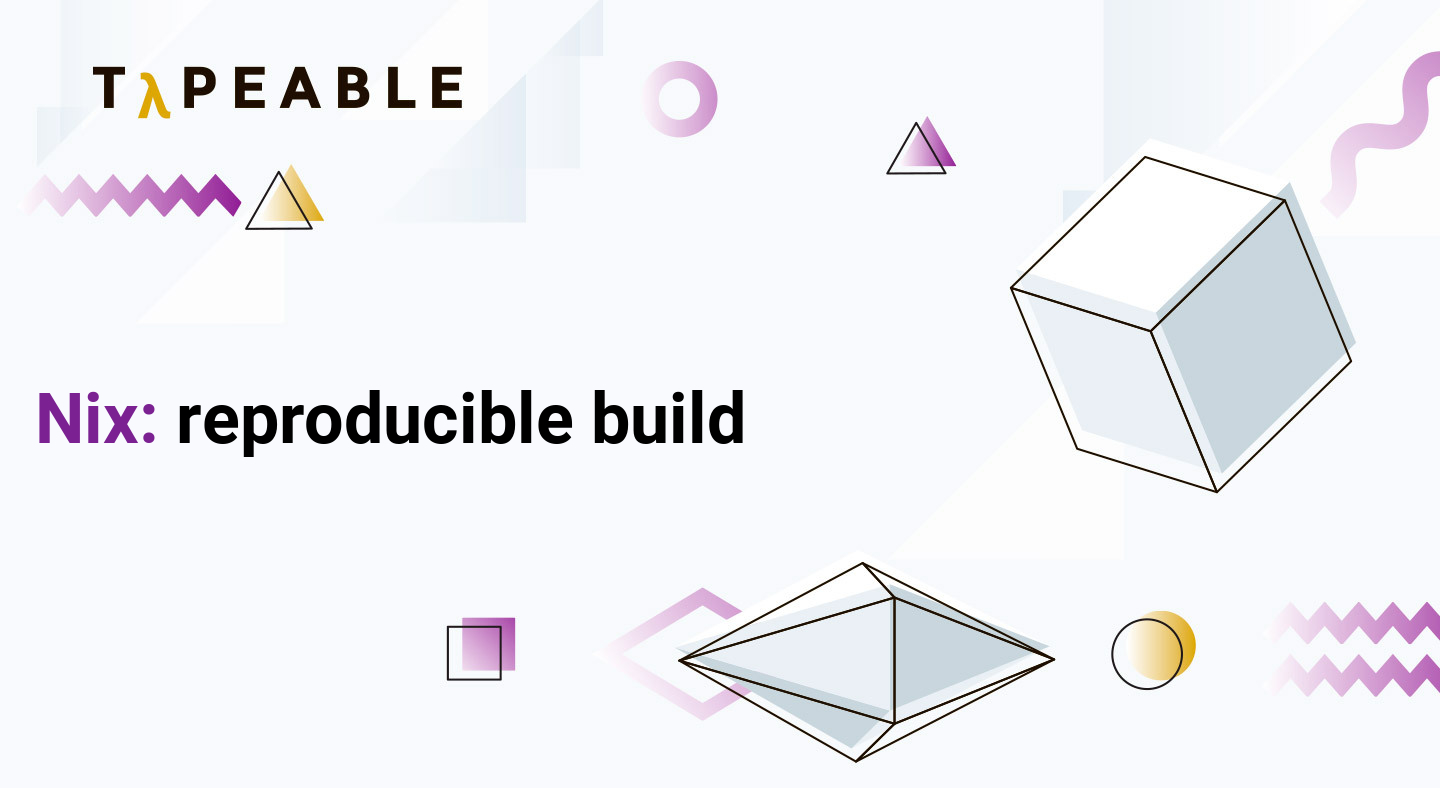 Today we continue our series of posts about Nix and the way we use it at Typeable.

You can find our first post about Nix basics here.

As we like Haskell very much and often use it for development, we’ll use it for our sample application, but you don’t need to have any knowledge of Haskell. After some small fixes, the code shown in the examples can also be used to build projects in other languages.

You can find the complete code for this post in this Github repository.

Building and CI are some of the biggest problems in software development. Support for build infrastructure often devours an incredible amount of resources. We will use Nix and try to make the situation at least a little more tolerable, even if it’s not possible to amend it. Nix allows us to achieve the reproducibility of builds in our projects, portability between different OSs, unification of components written in different languages, and so on.

So, let’s start with the application we want to build. In our case, it will be a simple program in Haskell displaying the message “Hello, world”.

To build a project without Nix, we use stack utility (for more details on the utility see here). The description of our project for stack requires stack.yaml file containing the list of our packages and the resolver. The latter is a stable slice of Hackage, the package base for Haskell which guarantees that all packages are built and get on with each other (NB: such slices are very much needed in other languages): ).

You can find the recipe for building the specific package in hello-world.cabal:

Our Nix code will use these two files to find the information on what exactly and how it should build. By way of an experiment, we can check if our code really runs and works:

Though Stack by itself is a great tool used to build projects in Haskell, it lacks many capabilities. There is the library haskell.nix developed by IOHK to build Haskell programs for Nix. This is what we’re going to use here. To begin with, let’s make sure that our project is built using Nix.

Haskell.nix allows using several lines to convert all data on our project build from .cabal-files and stack.yaml into derivationfor Nix.

Let’s check whether it’s now possible to build our project using Nix. To do this, it’s enough to use nix build command. As usual, the symbolic link result containing the resulting build will be created in the current directory.

Great! The little magic shown above has provided a completely reproducible build of our project, including all system dependencies. Let’s keep going!

It’s 2021 and many companies use Docker to deploy and launch services. Typeable is not an exception here. nixpkgs include very convenient tools named dockerTools designed to build containers. For more details on their capabilities open the link. I’m just going to show how we pack our code in containers using these tools. You can see the complete code in the file nix/docker.nix.

For a start, we’ll need the source container where we’ll place everything we need. Nix allows building a container completely from scratch without any unneeded components, but this approach is not always convenient. Sometimes, especially in abnormal situations, you have to get into the container manually using the command line. That’s why we use CentOS here.

For those who’ve ever worked with Docker everything is obvious here. We tell Nix what image from the public Docker Registry we’d like to use and specify that from now on we’ll refer to it as sourceImage.

The image itself is built using the function buildImage available in the dockerTools. This function has quite a few parameters and it’s often easier to write a wrapper for it, which is exactly what we’re going to do:

Our function makeDockerImage accepts four parameters: the container name, its version (at Typeable, we usually use a commit hash from git as the tag), the packages we’d like to enable and the entry point used at the container startup. Inside it we refer to the CentOS image as the basis (fromImage), plus add some utilities which can be extremely useful in emergencies.

Finally, let’s create the image with our marvellous application.

As the first step, we create an alias for the package we need so that we don’t need to write project.hello-world... everywhere. After that, we create the image of the container with hello-world package by calling the function makeDockerImage created previously. Parameter imageTag passed from the outside will be indicated as the tag; if nothing was passed, “undefined” will be indicated.

In a couple of minutes or even sooner we’ll get the symbolic link result leading to our finished image. Check again whether everything works as intended.

The result is that we’ve managed to create a reproducible build of our Haskell project using a comparatively small amount of code. The same can be done for projects in other languages after replacing haskell.nix with something else: nixpkgs has built-in tools for C/C++, Python, Node and other popular languages.

In the next post, I’ll tell you about the frequent issues occurring when you work with Nix. Stay tuned!